There are two types of modern hair transplant procedures. FUT (Follicular Unit Transplantation) and FUE (Follicular Unit Extraction), both of which involve taking healthy hair follicles from where the hair is growing normally – usually the back of the head- and implanting them in the bald area.

With FUT, which is also known as ‘strip harvesting’, the surgeon harvests a strip of skin from the scalp, in an area of good hair growth, which is later dissected into individual follicles for transplanting in the affected areas. It’s effective, but it does leave a distinctive and noticeable scar along the back of the head.

FUE, which the Harley Street Hair Clinic is renowned for, is rather more minimalistic. Individual follicles – typically holding between 1 and 4 hairs each – are removed one-by-one, with a micro surgical extraction instrument.

They are then transplanted into the bald area of the scalp, with the surgeon taking care to mimic the pattern of the hair that used to grow there. It is delicate and intricate work, but well worth the extra effort. The procedure leaves little or no noticeable scarring on the scalp and, when performed by one of the clinic’s talented surgeons, creates a remarkably natural looking result.

The follicles have to be selected, examined and carefully prepared for implantation. And this is where the Vision Engineering’s Mantis Elite 3D eyepiece-less microscope plays an important role.

As the surgeon extracts each follicle it is placed into a petri dish and passed to a nurse who carefully inspects each one under Mantis microscope to make sure that it is a good implant candidate. The healthy specimens then have to be trimmed around the edges of the sheath that surrounds the hair’s root, and any excess fibrous and fatty tissue is removed, leaving the follicle ready to be inserted into a graft needle. All of this has to be done without damaging the follicular cells.

Examining and preparing the harvested follicles is precise and demanding work. In some cases, as many as 1,200 grafts can be selected and prepared in two consecutive sessions which last 90 minutes each. It takes extraordinary concentration and there must be no distractions. 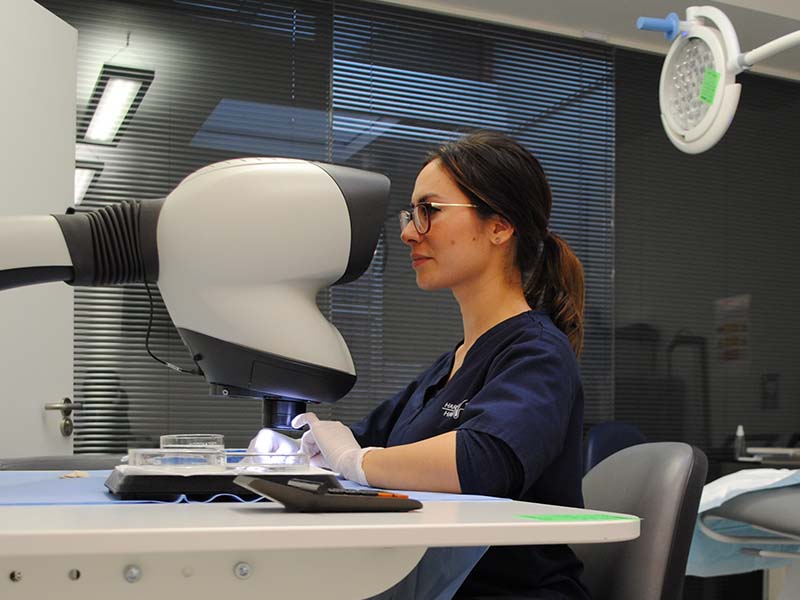 “Mantis Elite makes the selection and examination of thousands of hair follicles much easier and far more comfortable. We would never go back to using ordinary microscopes.”

With conventional stereo microscopes, the operator is forced to hunch over the equipment. This is fine for short-term use, but the extended, continuous sessions required for selecting and preparing hair follicles are much more physically demanding. Cramps and discomfort are never far away.

The Harley Street Hair Clinic has given many celebrities (who have to remain nameless, but you would certainly recognise some of names) a full head of hair. For some people in the public eye, it is important to present the right image and hair is an important concern. But it’s not just for celebrities.

The clinic recently surveyed 1,000 men and 1,000 women to learn more about their views on hair. The results contained a few surprises. For example: The average person is absent four days of work per year, due to not being happy with their hair. 8% of respondents admitted to missing about seven working days for the same reason. 1 in 6 admitted that they look for a good head of hair when dating.

More than a quarter of respondents aged 25-34 reported that they have judged someone negatively because of their hair ‘numerous times’, as had 20% of respondents over the age of 55. Over a third of respondents aged 16-34 agree that a good head of hair can make someone more attractive. 1 in 5 respondents aged 45-54 said the same. Hair, it seems, is important to a much wider population than just footballers, actors, rock stars and TV personalities.

Is it for you?

FUE is not a quick procedure, nor is it cheap. But it will last a lifetime and, for some, restoring a full head of natural hair has life-changing benefits. One day, hair transplants as performed by the talented surgeons and nurses of Harley Street Hair Clinic, aided by 3D technology such as Vision Engineering’s Mantis Elite eyepiece- less microscopes, could become much more popular and mainstream.

Minimal training is required: all you need to learn is how to set height of the Mantis head and how to adjust the focus, then it’s just a matter of getting used to working with the bright, full colour 3D images. If someone else wants to use a Mantis, personal adjustments take less than a minute.

Mantis eliminates the need for restrictive eyepieces. Indeed, it eliminates discomfort. Without ever compromising a comfortable, natural posture, the operator can look at a viewing screen, which gives a bright 3D image and a magnification of up to 20x. What’s more, its long working distance and large field of view allows the operators freedom of movement and superior hand-to-eye co-ordination.

This, and a choice of stands and other accessories, makes Mantis one of the world’s most comfortable stereo microscopes in the world, even when the operator is working through long or repeated sessions, or is wearing glasses.

The Harley Street Hair Clinic has four treatment rooms, each equipped with a Mantis Elite. The four workstations have convenient electronic height control and an adjustable, ergonomic chair with extra padding for comfort. Together, they eliminate the common problems of having to either stretch because the microscope is too high or slump because it is too low.

Headquartered in Send, Surrey, Vision Engineering have designed and manufactured of world leading stereo microscopes for over 60 years. Engineers and scientists worldwide use the company’s high-quality systems for a wide range of inspection and measurement applications across a broad range of industries. Renowned for pioneering optical design, Vision Engineering’s microscope and metrology systems perform to the highest standards.

You can find out more about which cookies we are using or switch them off in settings.